My Words, My World

Archive for the category “Death”

In all my years as a detective on the Kent police force where, admittedly, I wasn’t inundated with out-of-the-ordinary cases, this was probably the strangest.  if I hadn’t had been there, I’d have laughed it off. I was, however, so I didn’t.

Being close to London, we had our share of dead bodies turning up, the majority of them unwillingly dead.  Then we had the willingly dead, the suicides, which normally entailed jumping off something high, into something deep or into the path of something heavy and fast-moving.  The story of The Seeker is none of the above.

Why The Seeker?  Well, his circumstances brought to mind that old song by The Who, we named him that in the station and it stuck.  When we have our pub get-togethers the case still gets referred to as The Seeker and yes, we smile about it now; certainly more than we did when we found him.

We were called to a semi-detached house on the outskirts of Tunbridge Wells one morning.  It was June and the glorious English two-week summer had been and gone and had been replaced by scattered showers and lower than average temperatures.  The bin men had become concerned at the lack of refuse at number 31, The Rise.  Strange, they said.  Not like him, they said.  Never goes on holiday, they said.  Would you mind checking?  So Davis and I pulled up outside number 31, between downpours, and knocked on the door.  Receiving no response, we circled the house, round to the back garden.  The only window open was the small hopper window, impossible to get through without removing it.  10 minutes later, Leatherman multi-purpose tool in hand, the window was off its hinges and Davis was head first and arse last through the hole.  I could only hear his muffled voice.

“Just open the door and let me in so we can confirm the man’s gone off on holiday and get back to the station for a coffee.”

The key turned in the kitchen door and it swung open.  Davis was right, the place stank.  I would, however, contest that my armpits smell like that.  The mewing of cats came from the landing above our heads as we walked through the hallway.  We looked at each other, no words needed.  Something wasn’t right. The stairs creaked as we made our way up. The cats scattered as we reached the landing, at least five or six of them.  The stench was almost unbearable.  A reluctant room-to-room followed.  We found him in the small studio room, still sat at his computer.

With the help of Martins on forensics the story was pieced together and it went like this.

The man had had an addiction.  No crack, meth or needle chill for The Seeker, no.  just good old Google.  He’d played chicken on the information super-highway and lost.  Too much information can kill you – ignorance is bliss.  He should’ve listened.

Only afterwards, going through his browser history, did the full extent of his addiction come to light.  He’d researched everything from an aardvark’s anal glands to a zebra’s zoonosis.  During this month-long bout of browser fever, he’d starting neglecting himself then he’d started neglecting his cats.  The official cause of death was dehydration; he’d sat and sat until his body was so drained of fluids he’d just collapsed.  He’d even rigged up some form of hose system to an old washtub so he didn’t have to get out of his seat.  No eating for The Seeker, he was nourishing himself in a Wikipedia frenzy, feeding off a You Tube drip and, slowly but surely, Googling himself to death.  Somewhere during the course of this derangement his dehydrated body gave up and his heart gave out.  At least we hope it did.

After all, the cats had to eat.

Song of the sea

I want to write a poem of the sea
and watch the gulls,
wind-blown and free
and feel the breeze caress my face

I want to hear the story of the sea,
to feel the sun
burn and scorch me,
in the salt spray of the breaking waves

I want to sing the song of the sea,
the siren’s call,
the fisherman’s plea,
as the storm clouds gather on the horizon.

I want to give myself to the sea
at the end of my time,
and let my body
be taken in the longship’s flames 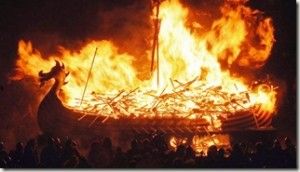